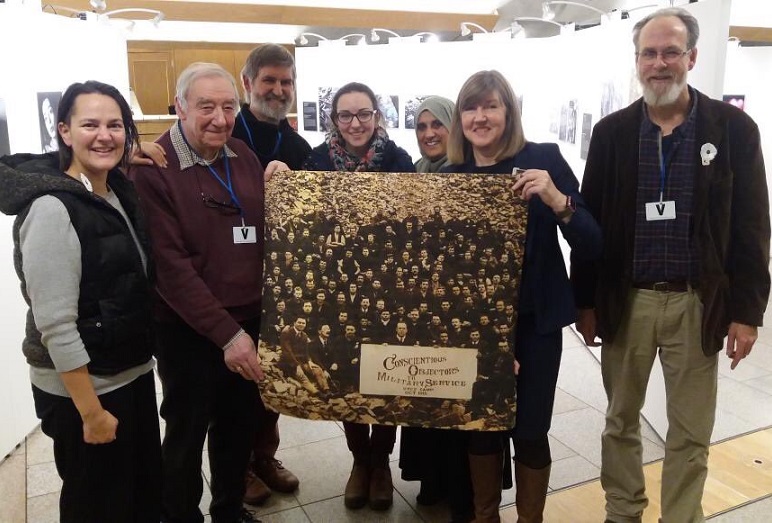 £19,000 Raised in October / November Crowdfunder. Donations still welcome. Thanks to all who have donated & helped raise £19,000 for Opposing War Memorial doubling donations received so far to £37,000. Now we can get technical drawings, engineer certification & planning permission and deliver workshops so people can be involved in the project. We’re over half way to goal of £59,000 in private donations. The support shown by City Council, Scottish Parliament and so many donors will help us raise the balance of the full budget of £168,000 from grants.

Our proposal for a Memorial to Conscientious Objectors and all who oppose war has been enthusiastically approved by the Transport and Environment Committee of the City of Edinburgh.

Councillors unanimously supported the proposals.. Green Cllr Chas Booth said: “I think it’s fantastic. It’s clearly beautiful and it encourages thought, it encourages respect for those who showed the bravery to stand up in the past to war.” Conservative Cllr Nick Cook praised “the consideration and the thought that has gone into this”.

Transport and Environment Convener, Cllr Lesley Macinnes who formerly worked for a landmine and cluster munition NGO said: “I was tasked with dealing with those weapons and the impact of those weapons both during conflict and post-conflict. I’ve witnessed and understood very clearly the impact of war on human lives. I think it’s very important that the voices that represent opposition to that can be heard in Scotland’s capital city.”

A transcript of our deputation is available at www.opposingwar.scot.  Officials have confirmed our choice of location for the Memorial between the Ross Bandstand and the Ross Fountain in West Princes St Gardens, subject only to archeological investigation of the ground.

MSPs from all parties Support the CO Memorial

A motion by Alison Johnstone MSP supporting our proposal for an Opposing War Memorial was debated by Scottish Parliament in early December. There was support from all parties and from Scottish government. Several MSPs made very moving contributions recalling past COs who were ostracized, treated harshly and even died in prison, noting Conscientious Objection as a human right, and calling attention to contemporary COs around the world. Many MSPs congratulated the Peace & Justice Centre for our work on this. A transcript of the debate is available at: https://opposingwarmemorial.wordpress.com/2018/12/14/msps-from-all-parties-support-the-co-memorial-in-debate-at-scottish-parliament/. The debate was Livestreamed on BBC Scotland’s Holyrood Live. Watch the full debate at: www.scottishparliament.tv/meeting/members-business-remembering-conscientious-objectors-december-5-2018

This Evil Thing Fundraiser performance raised £1,000 for the Memorial.

We are very grateful to Michael Mears for the donation of a performance of his one-man play about First World War Conscientious Objectors. In one scene the audience was involved in re-enacting a meeting of the No Conscription Fellowship where the audience waved handkerchiefs instead of applauding speakers in order not to aggravate a hostile mob outside. That episode inspired Kate Ive to design a bronze handkerchief peace tree for the Memorial a fantastic moment of synergy between these two projects.

Why An Opposing War Memorial in Princes St Gardens

Conscientious objection and opposition to War is a significant part of our history, especially in Scotland, yet it is scarcely recognised in public space. 80,000 people marched to oppose the First World War on Glasgow Green in 1914. There were nearly 20,000 COs during the First World War and 60,000 in the Second. 1343 Scots appeared before Tribunals during the First World War. They were vilified, imprisoned, subjected to abuse and even torture for their principled stance. Many risked their lives serving in the Friends Ambulance Corps. 73 died in or as a result of imprisonment.

Those who have fought and died in past wars are well remembered, with 37 war memorials in Edinburgh alone. There are memorials to Conscientious Objectors in London, Cardiff and Glasgow, but not yet in Edinburgh. It’s time for an opposing war memorial in Scotland’s capital city.

Celebrating COs and those who oppose war.

The Opposing War Memorial will celebrate the fact that Britain was the first country to recognize a right to conscientious objection to military service. It will memorialize the history and struggle of COs and opposition to war and suggest another way to resolve international disputes – the way of peacebuilding and conflict resolution. By inviting reflection on the role of those who followed their own consciences the Memorial will celebrate the values of liberty, humanism, tolerance and diversity at a time when these values are threatened.

Through its form the Memorial will include wider opposition to war honouring not just mostly male COs but also the equally important women who have campaigned against war and for peace, women like Chrystal Macmillan who attended the women’s peace conference in the Hague and Mary Barbour and Helen Crawfurd who organised the Women’s Peace Crusades across Scotland.

With fifty wars currently taking place around the world and conscription returning to half a dozen countries we want the memorial to include those who continue to resist conscription in places like Turkey and Israel, those who flee from places like Eritrea to avoid conscription, and those who oppose war today and into the future.

Kate Ive talks about the inspiration for her engaging and inclusive design concept in the crowdfunder video: https://www.facebook.com/edinpeaceandjusticecentre/videos/272985409993155/.

The Memorial has significant public support. Partners include civil society groups, faith groups and educators. It has been reported by the BBC and other media such as the Herald: https://www.heraldscotland.com/news/15655970.Scotland_remembers_its_conscientious_objectors/

We hope to complete and install the peace tree sculpture and bench in August 2019 to coincide with the centenary of the end of imprisonment for First World War COs.

Donate to the Memorial Here